Wales Rally GB will move back to its Deeside service park in 2020, after one year in the Llandudno town centre for Britain’s round of the World Rally Championship.

The move to the North Wales coastal town Llandudno last year was hailed as taking the teams and cars closer to the people, as Deeside is a Toyota factory on an industrial estate, a short drive outside the city of Chester.

Llandudno drew a mixed reaction from the WRC circus, some complaining that their service spot was tucked away from the public while most agreed the philosophy pf moving the event closer to a well populated town was the right move.

The event organiser has pointed to a later date in the calendar, October 29-November 1 as opposed to last year’s October 3-6 as a reason to move away from Llandudno, which should have high tides and inclement weather.

With less light at that time of year, Deeside should also offer crews more flexibility in getting into the stages in the light, according to the organiser.

“Having been made to feel so brilliantly welcome in Llandudno last year, this was a very hard decision to make,” said Hugh Chambers, chief executive of Motorsport UK, organiser and promoter of Wales Rally GB.

“However, this is a major World Championship event with a massive global TV audience and, having taken advice from all the experts, the responsible decision has led us back to Deeside for 2020. “This is a well-proven option providing the rally with a more suitable geographical location given the time of year.” 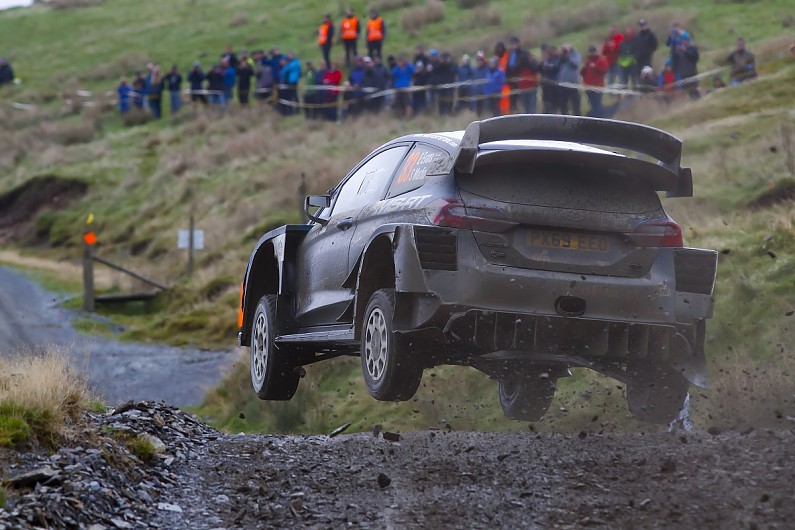 Councillor Louise Emery, Conwy County Borough Council’s Cabinet Member responsible for Events, added: “Over the last few years we have been working very closely with Wales Rally GB to increase the amount of activities that happen in Conwy County as we recognise the huge economic value.

“Bringing the Service Park to Llandudno in 2019 was something we were keen to see happen – it was challenging operationally but still a notable success in many areas.

“We fully appreciate the rationale behind the organiser’s decision to revert back to the Deeside model and very much look forward to welcoming back the WRC to the forests of Conwy County and Snowdonia come the end of October.”

The backlash against revamped Rally GB

The announcement of the service park move made no mention of whether the other two major elements of the 2019 event – a ceremonial start in Liverpool city centre and a stage at Oulton Park in Cheshire – would be repeated in 2020.

The World Rally Championship will return to Wales once again for 2020, it has been announced.

Following last week’s record-breaking Wales Rally GB , event organiser Motorsport UK has confirmed the event will be coming back for a 21st year in Wales.

The electrifying race will be staged from Thursday, October 29, to Sunday, November 1, and will the penultimate round of the FIA World Rally Championship – meaning the champion could be crowned here in Wales.

The calendar commences in Monte Carlo in late January and finishes in Japan in late November – so Wales Rally GB will be the last European round of the championship.

Hugh Chambers, CEO of Motorsport UK, organiser of Wales Rally GB told North Wales Live: “We are very excited to say that the rally will be returning to Wales next year for a further year – building on its success of 20 years in the country.

“I think it’s enormous as I have travelled across the countryside over the last week or so talking to people whether its the volunteers, the officials, the fans, everybody is saying the same thing – they want the rally to come back to Wales!”

He added: “The calender has been set for next year the World Rally Championship and our slot is a the end of October/the very beginning of November and we are very excited as it will be the penultimate round so we may even see the champion crowned here next year.

“Without the volunteers the rally wouldn’t take place, without the fans you wouldn’t have the atmosphere and the drivers’ excitement. All the feedback has been absolutely incredible about being based in the centre of Llandudno, giving us the opportunity to connect with fans.”

This year’s rally saw the ceremonial start take place at Pier Head in Liverpool with a new opening stage held at Oulton Park .

The rally base was also moved from Deeside to the centre of Llandudno with a stage also taking place along the prom in Colwyn Bay.

Mr Chambers said: “With Wales as the centre-piece, the whole rally benefited from the increased profile and fan support right from the start in Liverpool and the following spectator-friendly opening stage at Oulton Park.

Deputy Minister for Culture, Sport and Tourism Dafydd Elis Thomas said: “It was amazing to attend some of the stages of this year’s Wales Rally GB, including Llyn Brenig and the finish at Llandudno. It’s a great event, taking advantage of some of the stunning locations north and mid Wales have to offer while showcasing these to a world-wide audience. We look forward to seeing the organiser’s post event report and hearing the proposals for next year’s event in Wales.”

“Every year we challenge ourselves to make our round of the World Rally Championship even better than the previous one and, now Wales has been confirmed for 2020, we can start striving for even more exciting innovations for the WRC’s return in little more than 12 months’ time.”

Next year will be the 21st in succession that Rally GB has been staged in Wales and the 18 as Wales Rally GB with the Welsh Government as its principal funding partner.

The huge crowd this year got to witness the crowning of a first time Rally GB victor as Estonian ace Ott Tänak celebrated his maiden win – but only after an enthralling three-way tussle with title rivals Sébastien Ogier and Thierry Neuville.

Ensuring there was plenty for the many thousands of home fans to cheer, both Kris Meeke and Gwynedd’s Elfyn Evans were among the pace-setters throughout four memorable days.

Ulsterman Meeke set the early pace following the impressive Ceremonial Start on Liverpool’s historic waterside Pier Head and finally finished in a strong fourth position, while local Welsh hero Evans charged back mightily after an early error to claim a highly creditable fifth place on what was his return to the sport after a three month lay-off through a back injury.

The full route for the now confirmed 2020 Wales Rally GB will be announced in the New Year.